The hexane extract (concrete) of young male flowers of American willow (Salix discolor Muhlenberg) was analysed by gas chromatography. Beside the waxy compounds, the main detected constituents are floral-scented alcohols and salicylaldehyde. The results are a good example of the usefulness of processing concretes into absolutes.

In our region, one of the very first plant to bloom in spring is Salix discolor, commonly known as American willow. This bushy willow's female individuals bear greenish catkins, while their male counterparts exhibit bright yellow catkins (figure 1). These flowers, showing before the leaves, cheerfully color the otherwise dull colored landscape of our early springtime (figure 2). The latter also bear a subtle floral scent. Yet, flowers often contain so little volatile compounds (the odor treshold itself is not always a good indication of yield) that essential oil extraction requires tremendous amounts of plant material, as for rose or neroli.

In order to get a quick idea of the compounds responsible for the willow's aroma without collecting kilograms and kilograms of flowers, we submitted a handful of fresh male flowers to extraction with hexane for 48 h, followed by concentration of the sample under vacuum and analysis by gas chromatography. The results (Table 1) are quite typical for such non-polar fragrant extracts, also called concretes in the perfumers' vocabulary. 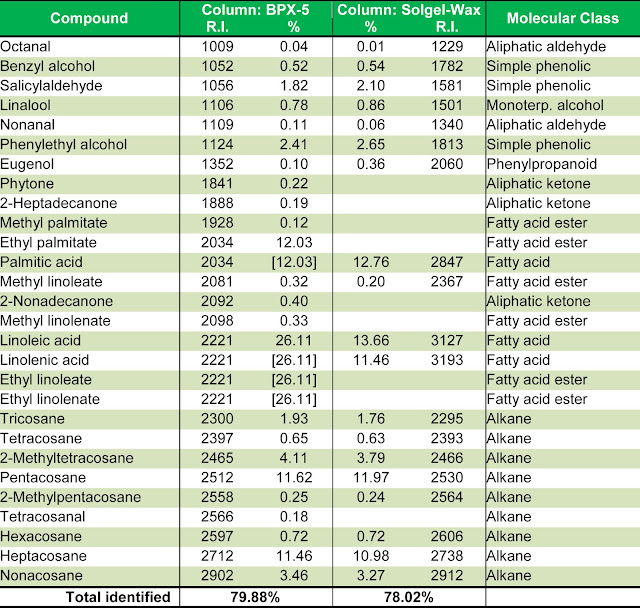 Volatile molecules are often quite non-polar, a feature which in general lowers boiling points (as previously discussed here). Thus, hexane or cyclohexane are good solvents to extract them, on the "like dissolves like" principle. These solvents also have a high affinity for less volatile, heavy non-polar compounds, including waxes and fatty acids. These constituents are not often found in essential oils, except for special cases (such as rose essential oil, and I will come back to that later on in these pages), but plenty in concretes. In the present case, waxes and fatty acids account for over 74% of the total detected compounds.

Here, "wax" refers to any compound featuring mainly a long carbon chain, with only a few other features. As pure molecules, they have a waxy texture, as opposed to crystals. The most abundants waxes (also called paraffins) are the alkanes, simply named from the number of carbons they contain following the standard chemical nomenclature: tricosane (23 carbons), tetracosane (24 carbons) and so on up to nonacosane, in this case. These molecules are often abundants on the surface of flowers and leaves, as their hydrophobic nature contribute to limit transpiration and loss of water in the environment. They also protect the soft tissues from weather and bruises, just as a wax-coated raincoat. Waxes can also include aliphatic ketones (such as 2-nonadecanone here), aldehydes (like tetracosanal) and alcohols (none found in this case).

The fatty acids, for their part, may either come from disrupted lipidic cell membranes or a small fraction of vegetal oil present in the flowers. It is likely that upon hydrolysis, more fatty acids would be release from triglycerides, which are so non-volatile that they can not be detected by gas chromatography, but were still likely extracted by hexane.

This shows that a concrete by itself contains a lot of unwanted compounds, which do not contribute to the aroma at all. This is why perfumers in general prefer to use absolutes, which are concretes dissolved in ethanol and filtered, leaving behind all insoluble waxes. Had we pushed the experiment to this level, we would have likely observed an extract much richer in floral-scented alcohols, and possibly detected many minor compounds which are currently "diluted" by the high wax content.

In conclusion, the floral scent of male Salix discolor flowers arise from typical floral-scented alcohols.
Posted by Alexis St-Gelais at 8:30 PM No comments:


PhytoChemia is an uncommon business. We launched the company while still completing our master degrees, which meant we were knee deep in fundamental research in chemistry. One of the motivations - especially for me - of setting up our laboratory was to have our very own scientific playground. As chemists, we feel that an important part of our job is to participate to the human quest for knowledge, if only humbly. This is why we always keep a small research project or two going on, and intend to publish our results in peer-reviewed papers, with collaborations whenever possible.


This happened for the first time this week, with the release of Aromas from Quebec. III. Composition of the essential oil and hydrolate of the roots of Anthriscus sylvestris (L.) Hoffm. from Saguenay* in the Journal of Essential Oil Research. This paper adresses the volatile constituents from a weedy species that has been introduced over a century ago in North America for Europe, wild chervil (Figure 1).

As mentionned earlier on these pages, we sometimes stroll in the wild in quest for interesting scents. Back in the summer of 2013, when PhytoChemia was a few months old, I stumbled on a dense colony of wild chervil. The plant itself is rather impressive, reaching about 5 feet high, and doing so very quickly in order to outgrow any competing species. By now, around here the plant is already lush with near-ripe seeds, and will likely dry out within two weeks, having completed its life cycle only halfway through our summer.


There was a faint scent to the leaves and the stem. Out of curiosity, I pulled a root, to discover it pretty much looked like a beige carrot, sometimes reaching a considerable size. It also had a pleasant scent, somewhat reminding that of the orange vegetable (which is not so surprising, since both plants belong to the same family, the Apiaceae). For fun, I thus extracted a root with hexane and gave it a quick check on GC. I then noticed that the profile was rather different from that of the only report for Anthriscus sylvestris oil by Bos et al. in The Netherlands [1]. The project was born.

We ran a small-scale hydrodiffusion study on several colonies, with three of them being collected in sufficient amount to collect enough pure essential oils for GC analyses. Not only did we observe that the terpenic composition of the oil differed from that reported in Europe, but we also found out that the colonies also were quite distinct.

This first paper deals with those analyses, casting a new light on the fact that wild chervil likely exhibits chemotypes. As far as the main molecules are concerned, it would seem that this species produces oils that can be rich or poor in β-phellandrene and myrcene, and exhibit an on/off behavior for the biosynthesis of trans-sabinyl acetate. The study also revealed the presence of some molecules that were previously unknown in wild chervil, such as the polyyne (Z)-falcarinol or the phenylpropanoid elemicin, which are often encountered in Apiaceae.

This is not the end of the road for us. With this study at hand, we have a firm ground for the analysis of much more wild chervil essential oils. This summer, we have started collecting hundreds of individual samples in order to establish wild chervil chemotypes on a statistical basis in our region. In the long run, we hope to be able to run a pilot-scale extraction with a local distillation facility on a well-chemotyped colony, and perhaps open the way for a possible added value for this invasive weed.

*The paper is the third of a series that was launched by Dr Guy Collin and his collaborators, which previously studied Acorus calamus and Asarum canadense. We have a very close collaborative approach with Dr Collin, who acts as a mentor, and he suggested that we kept fueling the Aromas from Quebec series.
Posted by Alexis St-Gelais at 11:12 PM No comments:

Popularization
Explanations on analytical or chemical principles, aimed at demystifying what we do for you
Events and Activities
Various occasions to see PhytoChemia in action
Our Partners
Allows us to introduce you to people and companies with which we collaborate, and what they do
Research Note
Exclusive laboratory results from our prospective projects, which we share with our readers
Discoveries
Interesting ideas and concepts from the field of natural products, picked from our readings and reviews
Plant Review
Entry presenting chosen information from the scientific literature about a plant species, according to the moment's inspiration
Abstracts
A glimpse of the work we publish in peer-reviewed journals
News
The latest important events about Laboratoire PhytoChemia